The election last November shook me, as it did so many people. I became fascinated with understanding these “other” voters so that I could see, through their eyes, these issues that seemed so black and white to me. I started to see the complexities in the challenges of American identity, job creation, political accountability. I began to search for books that might explain some of it, and there were a few that helped to describe the problem, but of course, most academics don’t propose solutions. That’s what designers do. But these topics are so much more complicated than the bounded problems we typically work on when there is a client, a set amount of time, a set amount of money and an expected outcome.

What would it mean to work on a design challenge that could take 100 years to solve? 50 years, ok, 20 years, if that helps it feel more plausible. 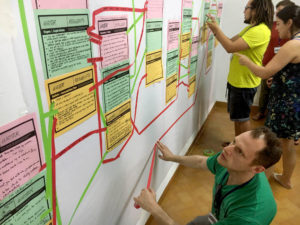 It turns out that Terry Irwin, the head of the School of Design at Carnegie Mellon is exploring this right now. She has instigated a new practice in Design called Transition Design, which comes out of her Ph.D. research with ecologist Gideon Kossoff, and philosopher turned design professor, Cameron Tonkinwise. The three of them propose that in response to the failure of Ecology and Sustainability to sufficient change behavior and improve attitudes toward more long-term thinking about the earth, Design may be able to help. But only with new tools to handle the complexity, new mindsets to deal with such long-term challenges and new training in systems of change.

I have to admit that I never personally connected with the Green Design movement, so I was surprised to find myself excited about Transition Design. But I think it is because Transition Design can be used to tackle any number of societal issues we face today, and it approaches with a great deal of empathy and a curiosity about the causes and mindsets that are at the root of the problem.

I was invited to attend a 5-day course in Spain with Terry, Gideon, and Cameron. The course had an incredible diversity of attendees: some service designers, some design professors but also community organizers and NGO workers– from all over the world. The attitude these three leaders take is that this discipline of design is just beginning, the same “problem worrying” they apply to Transition challenges, they apply to the development of the tools and methods themselves. It is all work in progress, and they invite us all to try it out and build on what is there.